Where is Your Treasure? 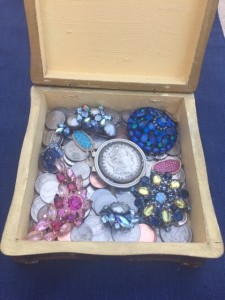 Not until we returned to Texas from living in Kansas City for 2 years did we notice a lot of the people in Texas had the same bondage we formerly had of acquiring things to anesthetize themselves and avoid their issues. There seemed to be a spirit of materialism over Texas compared to the tradition over Kansas City. I met a girl in my gym working out one day who was a Christian. She openly admitted she was a bit of a shopoholic. She loved to buy clothes but she said that when her focus and priorities were askew, God would deal with her by sending a moth that would fly around and land on her clothes. She was unable to swat it and it was a real nuisance. To tell the truth that seemed like a wild story to me.

The next day, however, I saw her again at the gym and sure enough, the moth arrived with her and was landing on her. I looked up moth in the dictionary and found that not only does it eat clothes but it is attracted to artificial light. Interesting… When I got right next to her, it would not alight on me. Perhaps I had been delivered from that mindset after our experience in Kansas City.

Amy shared that her sons were about to go to Christian camp for a week. She admitted to them her story about the moth chasing her because of her wrong priorities. When they returned from camp, they told Amy the leader’s lesson was taken from Matt. 6:19-21 “Do not store up for yourself treasures on earth where moth and rust destroy but store up for yourself treasures in heaven for where your treasure is, there your heart will be also.” The leader stated the fact that sometimes we see others that have more than us and we think the grass looks greener. Nevertheless, he said, it is not real or lasting. It is fake, like astroturf and only the treasures of heaven and Go’s kingdom are eternal.

Amy told the boys that they were going to take a trip to New Jersey to visit her sister, her husband and their cousins. They lived on a nice ranch. Since her sister and husband were wealthy, Amy wanted to prepare the boys to remember the kingdom lessons they were learning so they would not be jealous of their cousins. However, during their stay Amy’s sister ordered something that was delivered almost daily by the UPS truck to her kids. One day it was new cellphones, the next day the latest x-box and other toys. Amy’s youngest son was pacing in his room with his hand to his head talking aloud to himself, “It’s not real, not lasting, astroturf, astroturf, astroturf…”

Funny as that is we need to seriously change our mindsets and seek first the kingdom of God and all these things will be added also.

May I pray for you?
Dear Lord, Show us your kingdom and rebuild us in Your image. Just like the men on Emmaus Road help our eyes to be opened to recognize Jesus and help us to surrender to His rule and reign in our lives. Help us not to be envious of those around us with more material things but to have your kingdom and ways as the treasure in our hearts and focus. In Jesus name, Amen.