“I used to be a king (queen)
But everything around me
Turned to rust,
It’s ‘cause I built my life on sand
And I watched it crumble in the dust.”
(Songs for Beginners by Graham Nash) 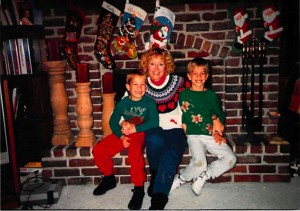 In the four years we lived in our new home, we began to experience a decline in our finances, many failed expectations, and a continual process of rebuilding a new set of values.

We sold our lovely home at the end of that time, felt called to a ministry venture in Kansas City, and moved there with our five-and six-year-old sons.

The boys had the time of their lives. They made lots of friends in their new school, played in the snow, and went on campouts. We drew close as a family. Spencer had an authentic salvation conversion at seven years old, and we learned to really study the Bible. I also taught school at home a few days a week.

We always looked forward to hearing what our sons were learning at school and during Bible time. On three different occasions Spencer reported at the dinner table, “Do not marry a Canaanite woman, remember God "rains" and there is no "condom-nation" in the Lord Jesus Christ.” We still remind him not to marry a Canaanite woman! As funny as that is, the theme continued not to mix our faith with the surrounding culture.

We began to get homesick for Texas after a year. Alan was asking for a sign to complete our term in Kansas City and return home. Our experience resembled the story of Moses killing the Egyptian. Moses tried to fulfill his call to deliver the Israelite people in his own strength. Instead he was exiled to guide sheep for forty years on the backside of the desert. Though we had not killed any Egyptians except maybe a few in ourselves, our time had not yet come. Yet there was a deposit God made in our lives during our stay that I could not even describe at this point.

Before leaving, I dreamed of being locked in a room with a mockingbird that kept hitting the walls in an effort to get out. The bird would fly, then hit the wall and get nowhere. I didn’t attach any significance to it at the time except that it was the state bird of Texas. I hoped it didn't mean if we went back to Texas we would be confined, mocked, and would go nowhere. Alan grasped that sign as permission to return to Texas. I wondered if we had walked through the doors that may have been opportunities for us but Alan was happy to have a sign to return to our friendly state. On our way back to Texas, we heard Mike Bickle's sermon confess that God had convicted him of not having a meeting to see what the ones sent to KC believed they were called to do. He asked for no one to leave and that he would try to incorporate people into a plan of service. It was too late for us. After eighteen months of serving at church in KC, we returned to Texas, leasing a house in Arlington.

Years later, around 2000, after adjusting our values and suffering the discipline of our earlier actions, we were now walking the sincere Christian life. However, we were still struggling financially and dealing with tough circumstances despite the good seeds we were sowing.

Joni Ames, a prophetic woman from Florida, called a girlfriend I went to visit one afternoon. Though I had never met Joni, Denise handed the phone over to me for her message.

She explained the season I was in and said, “You are going through a pruning physically and spiritually in order to be more fruitful. You are not being disciplined but pruned. You are to pare down your belongings and get ready for the mission God has for you. All your dreams will come true.”

She gave three particularly meaningful scriptures which carried a flicker of hope that the circumstances I was about to endure would work together for good and prepare us for our future.

The next day I was listening to a cd about a woman my age who went to care for an ill, elderly relative. She testified to a life changing, meaningful time in her life. She mentioned at the end that she remained there two years.

“Two years!” I cried, “Why, that is an unreasonable sacrifice. She had literally lost her life by then.”

Oops, that may have been the point. Would God ask someone to do something for that long to accomplish His purposes? I shuddered at the thought and would soon find out.

My father-in-law died five years earlier and my mother-in-law needed support. She was lonely and depressed. Suddenly, our landlord transferred to Chicago and had to sell the house we were in. My husband’s salary shrank as the real estate market took a down turn. I had home schooled for many years but my two sons were entering high school in the fall, and we needed to be in the district they desired. We couldn’t find a house anywhere. Alan’s mom, Ida, offered to have us come for the summer to Hurst and live in the back two bedrooms and bath of her home so we could have time to find a house.

Alan had some issues to work out with his mom, and God was teaching me how to love unconditionally and follow His will. God urged us to accept this invitation as the temporary solution after praying about it. I believed we were coming there for a reason. God had a plan, and after all it was just for the summer.

Almost immediately after moving and putting our things in storage, Ida had a litany of injuries, including breaking her neck, which required surgery and our help to nurse her back to health and maintain the house. We needed the lower rent until Alan’s job situation improved. Looks like we were going to be here longer than the summer...

I began studying the story of Joseph. Joseph struck me the way he continued to minister despite his confinement in prison by interpreting the baker’s and butler’s dreams. Though I was being stretched beyond my limits in my new circumstances, I followed his example and went to my church to lead a prayer and healing team on Monday nights.

I knew God was speaking and I was on assignment at home, but no one wanted to hear what I had to say.

I was learning God is the only one who changes people but He uses us to pray it into being. My prayers could prepare the ground for the changes God wanted to make. Sometimes my care came across as pushy, but the truth is, I loved to see people grow. I discovered later in a spiritual gifts test that developing and connecting people were my top two strengths. I wanted to see people set free and connected. Don’t they want to be free?

Of course, I had my own issues which predominantly centered around impatience for process. I wanted everyone to take giant steps forward and change fast. Rather humorous when I think of it now.

As Beth Moore aptly stated in the Fruit of the Spirit Bible study, “You are making it hard for me to be a Christian!”

God was really pushing my buttons, and I was trying to learn how to love someone right where they were, not how I hoped they would become. People got on my nerves because I was not yet refined and needed others to grind patience into me. I wish I could say I had a mature attitude and motive of serving. Many days I did, but often I drifted back to asking what clues God would reveal for me to pray. I believed I would then complete my assignment and my family and I could be on our own again. There were no hard feelings against Ida, just a desire for independence and privacy, to get our life back quickly.

Discussion:
It’s easy to love those who love you and are your type but what about those who push your buttons? Do you see how God uses them in your life as much as He uses you in theirs? Have you ever made a judgment about someone and they proved to be the very person you needed in your life?
Can you tell of a time you have given up your life as you know it to serve His purpose?
Have you learned to bloom where you’re planted?

Man in the Mirror by Michael Jackson-

“I’m starting with the man in the mirror,
I’m asking him to change his ways
And no message could have been any clearer
If you wanna’ make the world a better place,
Take a look at yourself, and then make a change.”

This entry was posted in Lessons of the Desert. Bookmark the permalink.