I met Alan in my late twenties, and we jointly struggled with the sins of our past. As recently recommitted Christians, we experienced God’s intervention and discipline in the form of difficult circumstances. In the passage of time, we began to realize that the season of discipline we were experiencing was actually evolving into a sharp pruning.

Alan and I moved in together a month before our wedding to save the long drive between our houses. We knew we were about to make our commitment official and though we were both believers, chose not to wait until marriage to cohabitate. We dismissed the consequences of this decision, rationalizing God would understand. Despite our faith, we compromised and mixed the knowledge of God’s truth with the norms of the culture. Do you believe the Bible is true and that you will reap what you sow? I don’t think I really did. I’m not sure some of you do either.

In the biblical account of the book of Jeremiah, the narrative opens with God’s call on the life of the young prophet. The Lord impresses upon Jeremiah the vision of the almond tree and later a boiling pot, tilted from the north over the land of Israel. These two visions represent the unfolding agenda of God toward his rebellious people.  The almond tree is the first to awaken in the spring, describing the oversight of God, ever watchful to perform His word. The boiling pot represented the advance of the king of Babylon as the rod of God’s wrath against his wayward inheritance. In similar fashion, God confronted us, awakening Alan and I towards his total intolerance to both compromise and negotiation with Him.

One night before the wedding, we were aroused by a torrential storm. A gunshot startled me in the middle of the night. Was an invader coming from the two thousand acre wilderness behind our house? Running to the backyard in trepidation, Alan and I discovered the source of the noise. The wrought iron fence, which was affixed to the retaining wall in the backyard, had mysteriously snapped at a corner. This was very perplexing and we were slow to detect the grave situation which was unfolding before us. The retaining wall was failing as a result of the water-logged turf above it. The flooded backyard began sinking, and the collapsed retaining wall cascaded down the hill forty feet below to the Trinity River basin. There was no robber or was there?

The next day the house was condemned by the city. Fire engines, police, and newspaper reporters arrived to interview us. We were even mentioned on Good Morning America. Later that week, the insurance company decided this storm was an act of God, and they declined coverage.

We discovered the builder had backfilled the lot with trash and debris, which then deteriorated and crumbled in the storm. In the passage of time, the irony of this illustration was not wasted on us. The failure of our retaining wall in the storm mirrored the faulty foundation of our spiritual life. I learned quickly God does judge sin even in the believer. (Ps. 119:67, 71, 75).

Forty two months later, we settled a lawsuit with a developer of the property. God graciously allowed us to recover all of our expenses and an additional small sum of money. Alan and I knew we had served our prison term. The reality of God’s judgment had forever changed our theology.

We built another house nearby with a similar bluff view of the Trinity River basin.  I had a disturbing dream, however, shortly after moving into the house. My new designer platform bed concealed debris, trash, and a banana peel with no fruit. Additionally, I received I Cor. 3:12 in the dream. This revelation was concrete evidence that God was requiring some fundamental changes in our values. We did not immediately determine the nature of the defiling influences this dream alluded to. 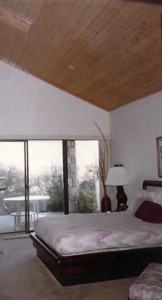 We would discover, however, that self-reliance and upward mobility were the chief objects of God’s focus. He would not allow us to anesthetize ourselves with material comforts, nor would He allow us to live as the world did.

God’s message of judgment then restoration sent through Jeremiah reminded me that whatever was amiss would be plucked up in our foundations and eventually restored and rebuilt anew in His kingdom. I would be glad when the tearing out process was finished.

Are you building on a lasting foundation or do you have some fill dirt mixed in with the select soil? Are you hanging out with the Canaanites and acquiring their values? What weeds need to be pulled in your family’s life? Have your failed expectations resulted in a healthy life lesson? Where is God rebuilding your house to dwell in?

Alan and I listened to a series of sermons called “Dream to Destiny” by Robert Morris. Joseph’s life illustrated many tests to go through to build the character to our destiny. When the sermon came to the Purity test, the lesson covered Joseph fleeing from the temptation and advances of Pharoah’s wife. Robert applied it to our lives and asked the congregation to confess and repent to God if you had relations before marriage which was not God’s perfect plan. He said no matter how long it has been since then, do not just assume that was in the past but both parties repent and make a fresh start in your marriage. We did this even though it was years later but have been married 38 years now…

Stay tuned for Part III next month of the next leg of My Personal Pruning.

This entry was posted in Lessons of the Desert. Bookmark the permalink.